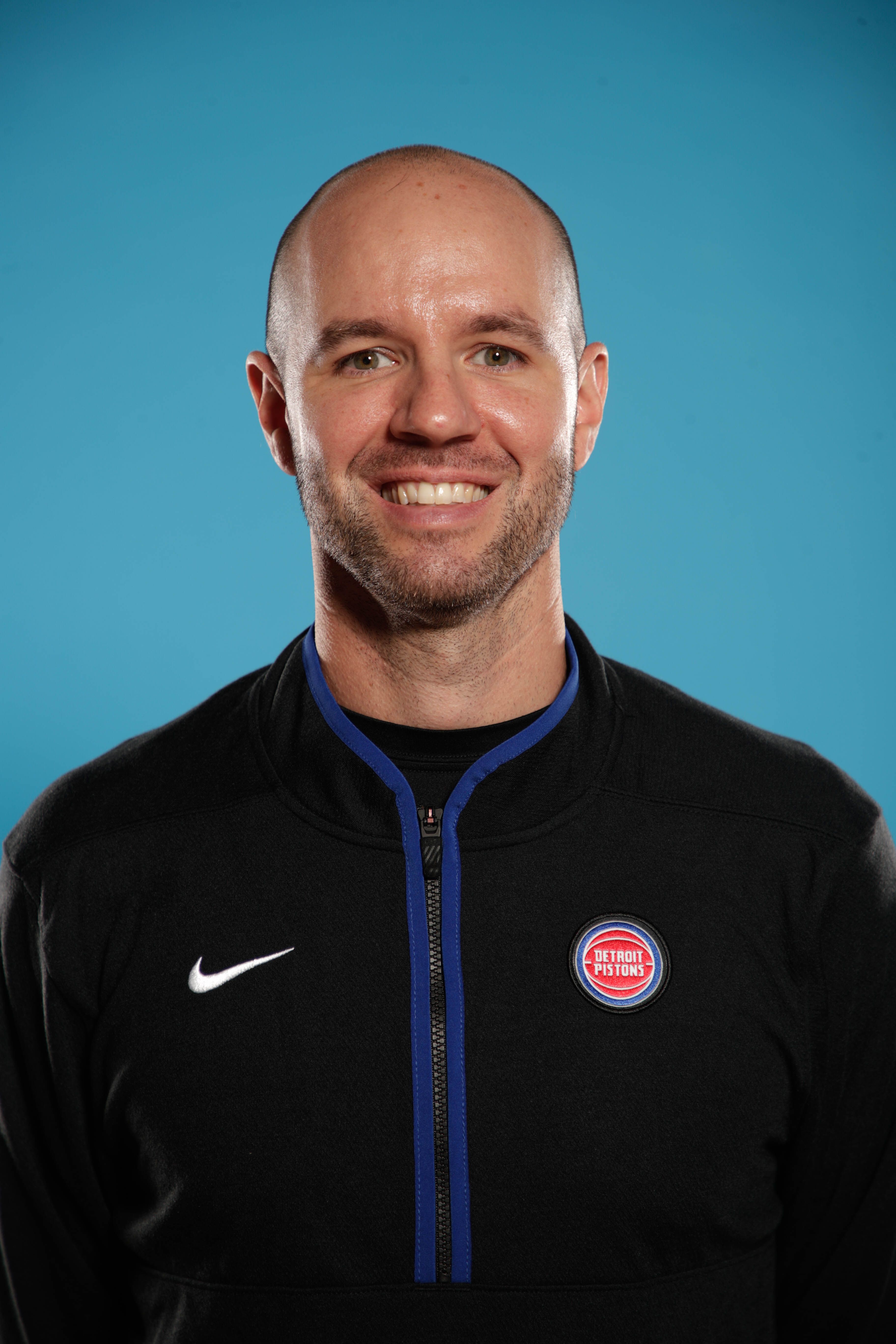 Education: Salem State University (B.S., A.T.C.); UMass Lowell (D.P.T.)
Hometown: Newton, MA
NBATA Member Since: 2016
Sebastien Poirier began serving as Senior Medical Director of the Detroit Pistons in 2022 after having spent the previous 6 years with the Brooklyn Nets. He graduated from Salem State University in 2009 with a Bachelor’s of Science Degree in Athletic Training. He then earned his Doctorate degree in Physical Therapy at the University of Massachusetts Lowell in 2012.

In addition to being a licensed physical therapist and athletic trainer, Poirier is also a board Certified Specialist in Orthopedics and is pursuing a fellowship in manual therapy. Poirier currently resides in Ferndale Michigan with his wife Christina and their 2 cats, Neon and Beau.

Cutts previously spent three seasons in various capacities with the Thunder organization including Head Athletic Trainer for the OKC Blue and Physical Therapist/Athletic Trainer for the OKC Thunder. Prior to pursuing a career in professional sports, she immersed herself in a post-doctorate orthopedic residency program to become a Board Certified Orthopedic Clinical Specialist (OCS) and further developed her expertise while working as a traveling therapist in diverse orthopedic and sports settings throughout the country. In addition, she is a Registered Dietitian (RD), Board Certified Sports Clinical Specialist (SCS), Fellow in the American Academy of Orthopedic Manual Physical Therapist (FAAOMPT), Certified United States Weightlifting coach (USAW), Certified Strength and Conditioning Specialist (CSCS), and Certified Manual Trigger Point Therapist (CMTPT/DN).

The St. Louis, MO native was a student-athlete at the University of Central Missouri. While being a member of the women’s basketball team, Cutts earned her bachelor’s degree in Exercise Science and then went on to earn a dual master’s degree in Nutrition & Kinesiology from Texas A&M, a master’s degree in Athletic Training from George Mason University and a Doctor of Physical Therapy degree from the University of North Texas Health Science Center. In her spare time, she enjoys staying active and spending time with her five nephews Kaara, Cristian, Asa, Calum, and Ezra.

Education: Auburn University (B.S.); Florida International University (M.S.)
Hometown: Fairfield, Alabama
NBATA Member Since: 2021
Brianna Jefferson joined the Detroit Pistons in 2021 as an Assistant Athletic Trainer. Brianna began her NBA career as a seasonal Athletic Trainer intern for the New York Knicks under Roger Hinds, Anthony Goenaga, and Erwin Valencia in 2018. After successful completion of her intern, Brianna served as the Head Athletic Trainer for the Detroit Pistons affiliate G-league team Grand Rapids Drive in 2019, and she served as the Head Athletic Trainer for the Golden State Warrior’s affiliate G-league team the Santa Cruz Warriors in 2021. Prior to joining the G-league and NBA, Brianna was working for Champion Sports Medicine under Mayfield Armstrong and Kevin Wilkes.

Brianna is dedicated to the well-being of others and served 8 years in the United States Army where she was able to administer first aid treatment, life support services, and treatment procedures including immobilization and airway management for her fellow battle buddies. During the off season, Brianna also assists Pace Academy and FEDEX in Georgia with injury prevention and rehabilitation. Brianna’s goal is to educate adults and children on how to recognize and prevent serious injuries/ illnesses. She also provides free medical care to individuals living in underserved communities alongside Dr. Kellie Middleton from Northside Hospital in Atlanta, Georgia.

Brianna is also a proud member of Mt. Canaan Full Gospel Church in Birmingham, Al. She is also a mentor and youth leader for Christian student athletes.

Brianna is the daughter of Barry and Sandy Jefferson. She has two sisters name Brittney and Brenayia Jefferson, and one brother name Barry Jefferson Jr. who all work in the movie industry for Netflix and BET. Brianna is also the proud auntie of Briniyah, Bri’Arie, and Jordan Jefferson.

Education: Long Island University: Brooklyn Campus (BS, MS); University of Delaware (BS, MS, DPT)
Hometown: New City, NY
NBATA Member Since: 2020
Harrison Herman is the Rehabilitation Coordinator and Assistant Athletic Trainer for the Detroit Pistons, having joined the organization in 2021. Prior to joining the Pistons, he worked as Physical Therapist and Assistant Athletic Trainer for the Brooklyn Nets for 1 season.

Harrison has had a wide variety of experiences working in outpatient rehabilitation clinics, including the Hospital for Special Surgery’s Sports Rehabilitation and Performance Center as well as in an intern role with professional and collegiate sports teams, including the Brooklyn Nets, Indiana Pacers, and Columbia University.