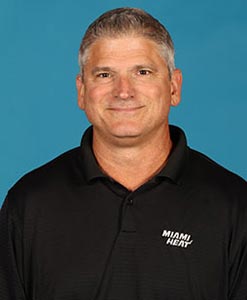 Education: Florida International University (M.S.)
Hometown: Miami, FL
NBATA Member Since: 1995
Jay Sabol begins his eighth season as Head Athletic Trainer for the Heat. Taking the post from Ron Culp in 2008, Sabol has spent the last 27 seasons with Miami, including 13 as Assistant Athletic Trainer. In his current capacity, he oversees the entire sports medicine staff to keep the Heat healthy during the regular season, postseason and off-season. Sabol has previously served as the team’s equipment manager and assistant strength and conditioning coach, and served as a team attendant for his first five years with the organization. Sabol was born and raised in Miami and graduated from Florida International University in 1992 with a Master’s Degree in Exercise Physiology. As Assistant Athletic Trainer from 1992-95, Sabol covered basketball and soccer for FIU, while working games as a training room attendant for the Heat, before joining the team full-time in 1995. He is certified by the National Athletic Trainers Association, National Strength and Conditioning Association, National Academy of Sports Medicine and licensed by the State of Florida Department of Health. 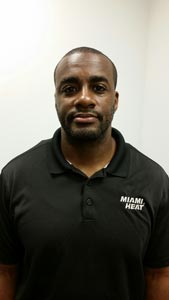 Education: UNC Wilmington (B.S.); Old Dominion University (M.S., Ed)
Hometown: Jacksonville, NC
NBATA Member Since: 2014
Wes Brown has been an Assistant Athletic Trainer for the Heat since 2014 after spending seven years at the University of Miami as associate athletic trainer. His duties include managing the day-to-day health of Heat players during the regular season, postseason and off-season.

During Brown’s tenure with the Hurricanes, he provided daily medical care for the men’s basketball program as well as the cheerleaders and Sunsations. He also served as an approved clinical instructor for Miami’s CAATE accredited Undergraduate Athletic Training Program.

Prior to his arrival at UM, Brown spent five years at UNC Wilmington where he served as the Director of Sports Medicine for three years. Brown is a certified performance enhancement specialist (PES), certified corrective exercise specialist (CES), certified Kinesio taping practitioner (CKTP) and a Level 2 fascial stretch therapist. He also taught classes as an instructor for the Kinesiology department.

Brown and his wife, Alana, have one son, Kayden and one daughter, Ariana. 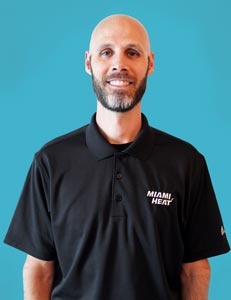 Gilliam holds a Doctorate degree in Physical Therapy from Belmont University and is a NATA Board Certified Athletic Trainer (ATC). Gilliam is SFMA and FMS certified and has lectured both nationally and internationally on the Selective Functional Movement Assessment (SFMA).

A native of Sewanee, Tennessee, Gilliam earned a Bachelor’s degree in Exercise Science as well as a Master’s degree in Human Performance and Sport Studies from the University of Tennessee where he developed his interest in athletic training while serving as a student athletic trainer for the football and men’s basketball programs. He was a student athletic trainer for the 1997 and 1998 Southeastern Conference championship football teams and the 1998 National Championship football team. 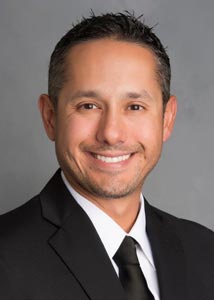 Education: Cal State-Fullerton (B.S.); Cal Poly Pomona (M.S.)
Hometown: Yucaipa, California
NBATA Member Since: 2014
Armando Rivas begins his fourth season with the HEAT as an Assistant Athletic Trainer. As part of his duties, he assists in the specific aid of HEAT players, attending to their individual care and needs.

Rivas brings with him a wealth of experience in the field of sports medicine. This season marks his ninth consecutive year in the NBA, with previous stops in Philadelphia (one season), Minnesota (one season) and Chicago (three seasons). Prior to joining the basketball world, he spent seven years as the Director of Sports Medicine/Head Athletic Trainer for the Los Angeles Galaxy and eight as the Head Athletic Trainer for various minor league teams in the Los Angeles Angels of Anaheim organization.

He graduated from Cal-State Fullerton with a Bachelor of Science in Athletic Training and followed that up with a Master of Science in Exercise Physiology from Cal Poly Pomona. A native of California, he currently maintains residence in Rancho Mission Viejo.

Education: West Chester University
Hometown: Southampton, PA
NBATA Member Since: 2017
Jeff Bangs begins his third season with the HEAT as the Assistant Athletic Trainer/COVID Coordinator. In his role, he assists in the training room and facilitates all COVID testing and case management. He also travels with the team to assist players and staff with their needs on the road.

Prior to joining the HEAT, Bangs spent four seasons with the Washington Wizards, including two as the Head Athletic Trainer. He graduated from West Chester University with a Bachelors of Science in Athletic Training. A native of Philadelphia, he currently resides in downtown Miami.